What does  "Don't Mess With Texas" mean?  Find out here and see celebrity Texans speaking for the cause in new and vintage commercials. 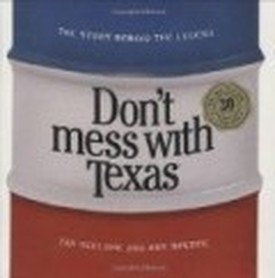 What Does Don't Mess With Texas Mean?

This slogan was first introduced many years ago by the Texas Department Of Transportation to support the idea of keeping Texas roads clean. It was recently announced that a new campaign has been launched.

While the idea remains the same, some different wording has been added to the garbage cans that invite you to drop your trash off in the proper place. This is an effort to reintruduce this to a new generation of Texas residents and visitors to the state.

The Story Behind Don't Mess With Texas

Actors And Singers Ask You Not To Mess With Texas

Many Texans that you will recognize add a celebrity touch. Besides these, there are lots of other commercials on Youtube if you are interested in seeing other musicians, actors and sports celebrities giving their pitch to support the campaign.

Get Your Own T-Shirt

These shirts are only a couple of different styles with the Don't Mess With Texas saying on them. There are  lots of others available.

Without a doubt, Willie Nelson is a fan of the great state of Texas and I have been a fan of his for many years.

When George Strait talks, people listen... well, maybe that's just me. hahaha   I will listen to him sing, talk, whistle or anything else. He is one of my all time favorites in country music.

He lends his words and love for Texas in this commercial.

What Happens If  You Mess With Texas

Just in case you are wondering.