Information, photos and facts about deer. Whitetail deer in Texas. How to raise a deer. Orphan deer and pet deer. 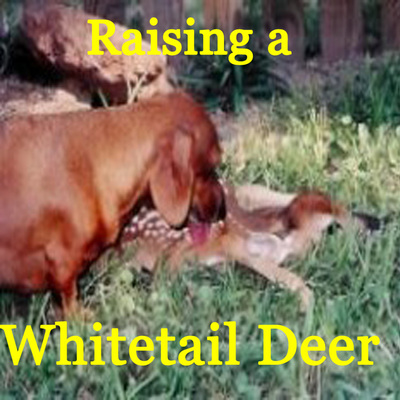 Raising A Whitetail Deer - The Tail Of Tinkerbell

Imagine living where the deer actually do play. Where they share a clubhouse with kids, go fishing and their best friends are cats and dogs.
Oh wait, imagine no longer. take a visit to where I live. Meet Tinkerbell, Rowdy and a few of my other deer friends.

Living in the country can bring many unexpected pleasures.

My son came in from school one day with a baby deer that he had found down by the gate. It was covered with ants and was very weak. He said I have a friend for you.

I suppose no truer words were ever spoken. 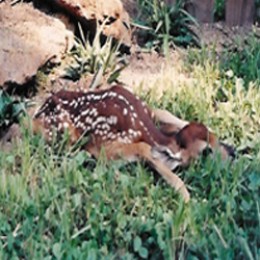 What Should I Do With An Abandoned Deer?

It was not our intention to keep Tinkerbell, just save her from the Texas fire ants and rejoin her with her mother.

We'd done it before with baby calves, goats. kittens and a squirrel or two so I had some experience and items around the house to pull from. We tried taking her back to where she was found and leaving her there watching to see if her mother would come back.

When I felt sure that wasn't going to happen, it was a done deal, I would do my best to keep her alive until she could make it on her own. She was always free to come and go, inside and out. I kept a collar on her so that (hopefully) hunters would know not to shoot her..

What To Feed A Baby Deer 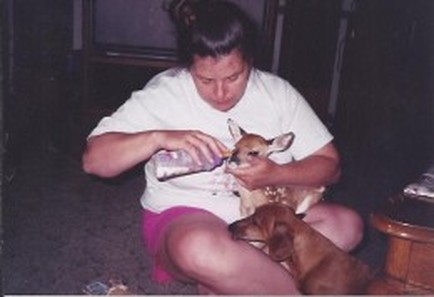 I knew the first thing Tinkerbell needed was something to eat so I went to my trusty little animal emergency box. All I had in the way of bottles was the size for a calf or a kitten and I needed something in the middle.

Until someone could go to the store for a baby bottle, I used one finger of a surgical glove with a pin hole in it and some warm kitty milk replacer. That idea probably got more milk on her than in her, so I opted for an eye dropper and slipped it in her jaw, giving her a little at a time. I held her head up slightly and felt her neck to make sure she was swallowing it.

After a run to town, Tinkerbell had her very own bottle and a bag of milk replacer for calves, but it wasn't that easy. The nipple on the baby bottle was still a little big so I had to pinch it over and squirt some in her mouth. It was a learning process for both of us.

I took a spare nipple that came with the bottle, sterilized it in hot water in the microwave and when it was cool enough, I put in in my mouth and chewed on it ...alot. It was 2 or 3 days before I got it to where it was softer, flatter and felt more natural to her. It was then I wondered if she hadn't really been born to a cow. Tinkerbell could put away some milk !! I fed her 5 or 6 times a day about a half a bottle at a time.

Tinkerbell was growing and so was the milk bill. One day I got caught short of milk replacer so I fixed her a bottle with whole milk from the fridge and that was the end of milk replacer. She loved the whole milk and was drinking it warm, a bottle at a time. By the time she was a year old she was still wanting milk and drinking at least a gallon a day.

It Was Very Interesting Having Deer As Part Of The Family 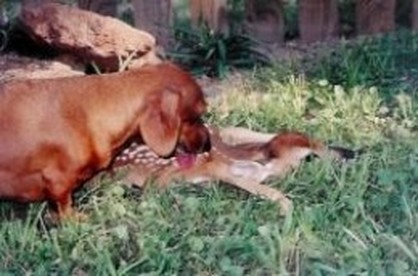 Tinkerbell's first friend was Sandy, our weenie dog. From the beginning they loved each other. Sandy decided own her own that she would help take care of Tinkerbell. She licked and groomed on Tinkerbell as if it were her puppy.

Certain cats were her favoites, I don't know how she decided that since there are always lots of cats outside to choose from. She liked to eat with them and on a few occasions I talked her into kissing a cat. She really understood what kiss ment.

Grain And Other Food For Deer

While Tinkerbell was still very young I tried introducing her to some grain, but she didn't seem to be ready yet.

What she was interested in was bread. First it was a nibble then a bite then a slice and then it was hide the loaf if you want toast in the morning. 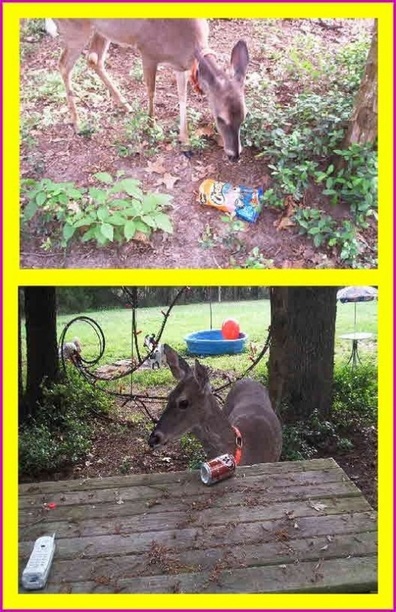 Tinkerbell came to like many other things to eat and drink. One thing was cat food, but every animal on this place loves cat food for some reason. She ate the skin off my fried chicken, a dill pickle from my burger and loved drinking my coffee.

She would try almost anything if I had it, but was very particular about taking food from other peoples hands. I think it may have been something to do with trust.

You couldn't leave a soft drink around. She learned that she could knock it over and drink up what spilled. 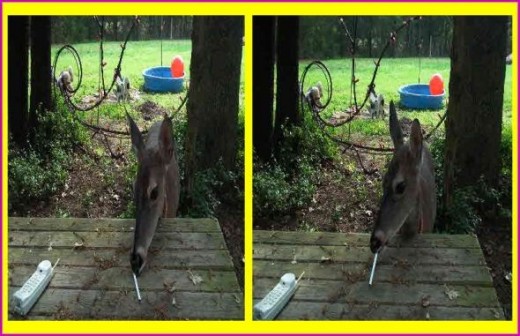 Tinkerbell loved to eat cigarettes, she would even stick her nose in my pocket and almost wrestle me to get cigarettes.

I didn't worry about her having them because as far back as I can remember my grandfather used tobacco as worm medicine for animals. 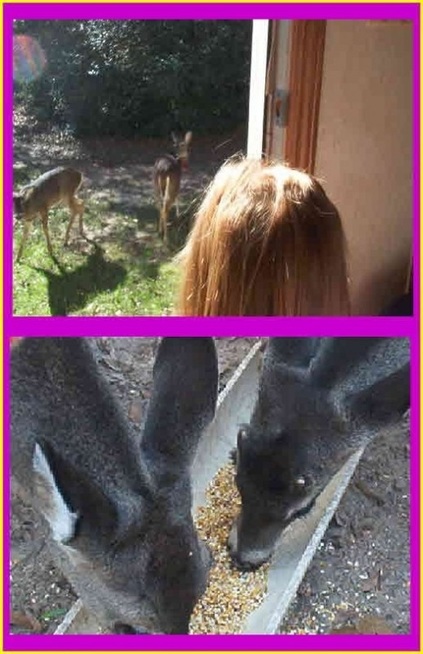 Day after day Tinkerbell would show up at the front door, and later bring her kids back with her for bread every morning and afternoon. I always saved stale potato chips, cereal and cookies for them too.

After the front door stop, it was around to the back for some grain. Her favorites were hen scratch and sweet horse feed and she always had access to salt and mineral blocks that were out for the cows and other deer. 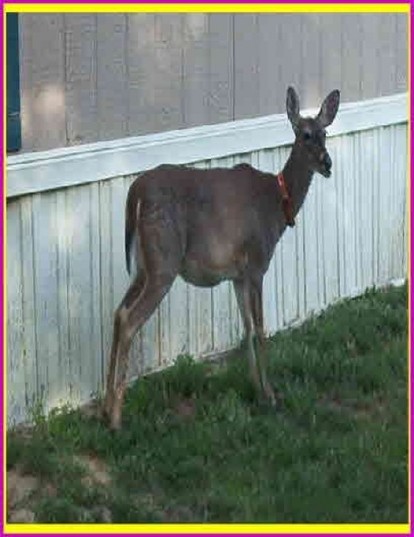 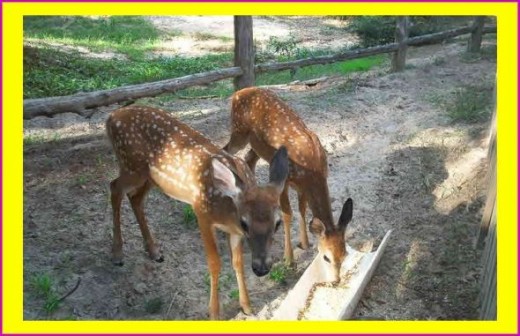 With all Tinkerbell had to do around the house, it's a wonder she had time for a boyfriend. After a couple of seasons, she had a baby each year, sometimes twins.

The first year she had twins, but one did not survive. The one that did, grew up and followed her around doing all the same things, and in a couple more years she had a baby and so on.

How To Communicate With A Deer

Tinkerbell could let me know what she wanted. From the time she was very small and I held her like a baby she would try to nurse on my ear lobe when she was hungry.

If she wanted to go outside she just headed for the door.

When she was bigger, she would stand on her back legs and put her front legs over my shoulders for a hug and she gave kisses just like a dog.

I recognized the sound she made, a deer grunt sound that she used to call me. I would hear her walk up the back porch steps and make her sound so that I would come to the door. I learned to copy that sound to call her also.

If she wanted me to go with her she would start with a nudge and walk away, if I didn't follow her she would come back and nudge me again. I was surprised after she had her first baby that she came to get me. I thought her instinct would be to hide it from everything and everyone, but she had me follow her into the woods and showed me.

Other Times She Would Call On The Phone 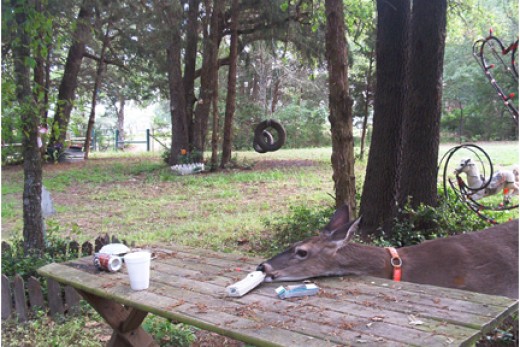 Tinkerbell's first friend was Sandy, our weenie dog. From the beginning they loved each other. Sandy decided own her own that she would help take care of Tinkerbell. She licked and groomed on Tinkerbell as if it were her puppy. Dalton, our Austrailian Shepherd, was more like a big brother.

Certain cats were her favoites, I don't know how she decided that since there are always lots of cats outside to choose from. She liked to eat with them and on a few occasions I talked her into kissing a cat. She really understood what kiss ment. 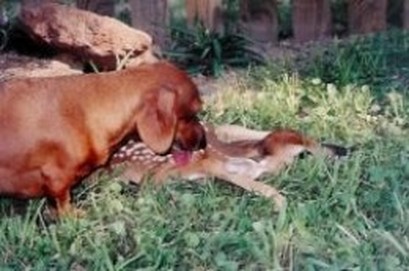 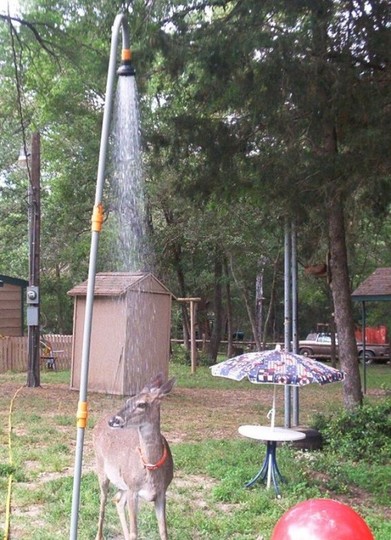 Tinkerbell liked to follow me around and tried to join in on what ever was happening.

She like to play in water. It seemed to make her happy or feel so good that she jumped and bucked like a baby calf.

She really loved to play with paper. When she walked with me to the mail box, I hoped for some junk mail or a grocery store paper, because she wanted something to put in her mouth to flip around or toss.

We Spent Alot Of Time In What We Call "The Park" . - Tire swings, picnic tables and a club house were just right for me and Tinkerbell to entertain our grandkid

Home, home on the range where the deer and the antelope play 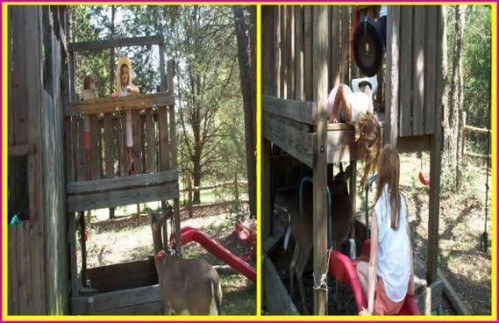 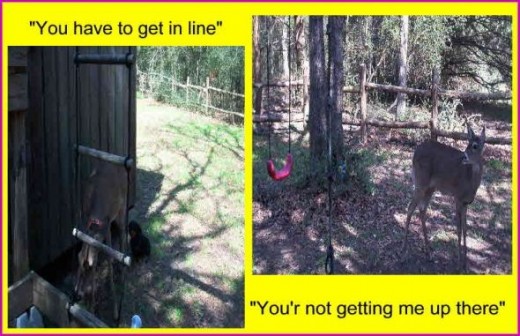 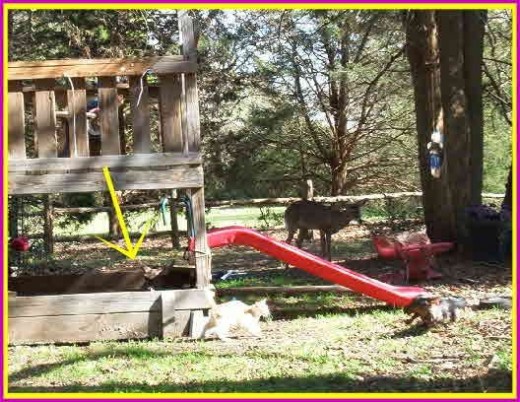 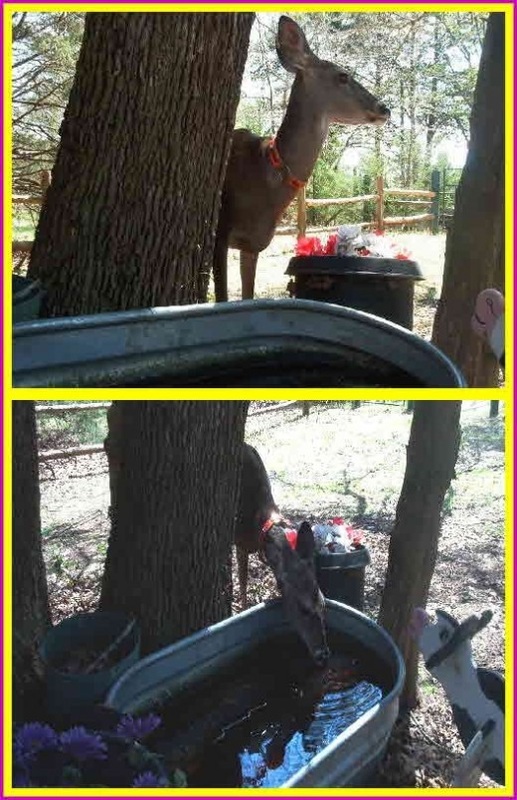 Most people were surprised that Tinkerbell had made it through about 9 years here without getting shot. attacked by another animal or just dying from age. So when I came home one afternoon from a weekend trip and my husband came to me and said that Tinkerbell was gone, I was shocked. I was wrecked. I cried and cried. This is a small town and many people knew about Tinkerbell, so when a friend heard a trucker talking on the CB radio about a deer with a collar hit on the highway, he call my husband. Things can happen so fast. I was only gone from Friday till Sunday. There was nothing I could have done to prevent it though, she was free to go where ever she wanted to.

There was nothing left for me to see, or be able to put her to rest with our other pets, so I honor her here. She touched my life in so many ways. I wish I had kept a journal during the time that Tinkerbell was with us so my thoughts would be on paper. The memories are with me and I guess that's what counts. I will come back and add some of my favorite stories and pictures of Tinkerbell, I hope If you've enjoyed her story so far you will stop back by or if you have a question about raising deer, please feel free to e-mail me.

I'm hoping to have some VHS tapes converted so that I can post them to the computer also. You will be able to see Tinkerbell in action. 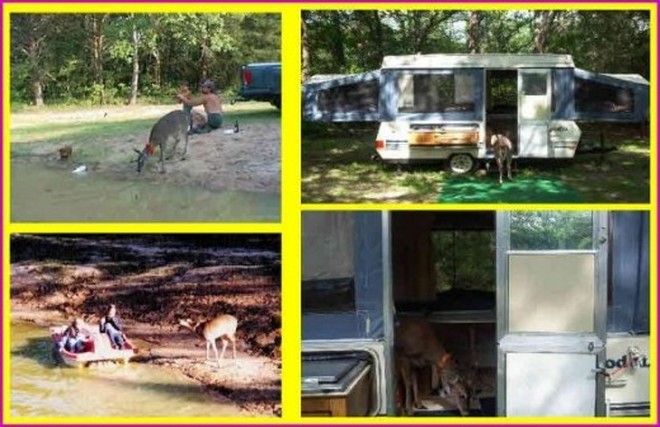